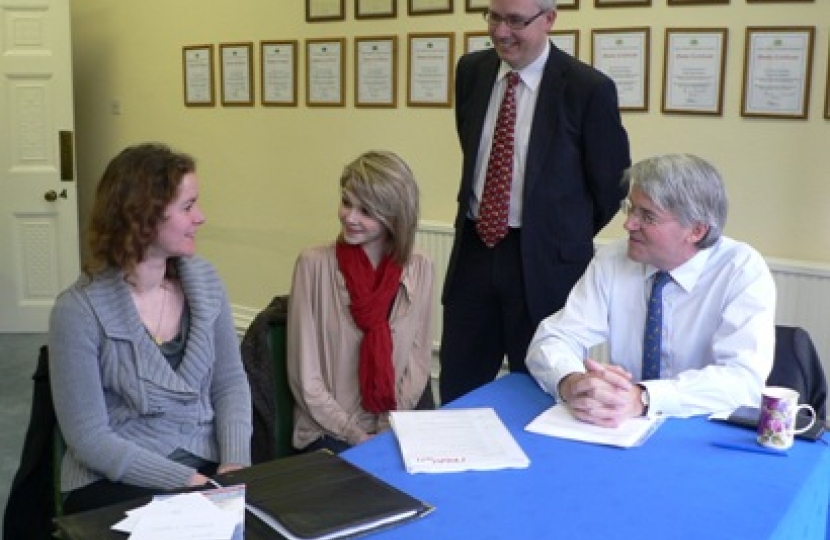 Local climate change activists Jennie Bull, Amy Turner and Paul Hanna have met with Andrew Mitchell MP at his office in Sutton Coldfield to discuss what they are doing to try to combat climate change and to seek his assurance that the Government is making progress on the issue.

The meeting was requested by the three local residents who state they are “Sutton Coldfield constituents committed to combat climate change.”

Andrew heard how they plan to work locally to achieve policy change, for example, Amy will work with the children in her Wildlife Explorers group to educate younger generations on the environment and green living.  Additionally, in her role as a family support worker, she will raise awareness of ways in which people can make their homes more energy efficient.  As an ex-pupil at Plantsbrook School, Jennie will talk to Sixth Formers, aiming to increase their understanding of climate change and inspire them to get involved in relevant local organisations and events.

During the meeting Andrew Mitchell MP said, “I share your concern about the threat posed to our way of life, our economy and both our local and global environment by climate change.  The consequences of climate change are too serious to ignore.

“Here in the UK the Coalition Government has introduced the Energy Security and Green Economy Bill to help Britain meet the low carbon investment challenge.  This Bill will help re-establish the UK as one of the most innovative and ambitious states when it comes to tackling climate change.”

Also at the meeting Amy Turner presented letters to Sutton’s MP from youngsters in the Kingsbury Kingfisher Group.  Mr Mitchell has written back to all of them individually.   He said, “I was particularly pleased to receive the cards from the Kingsbury Kingfisher Group and to see that so many young children are interested in their environment and the impact of climate change."