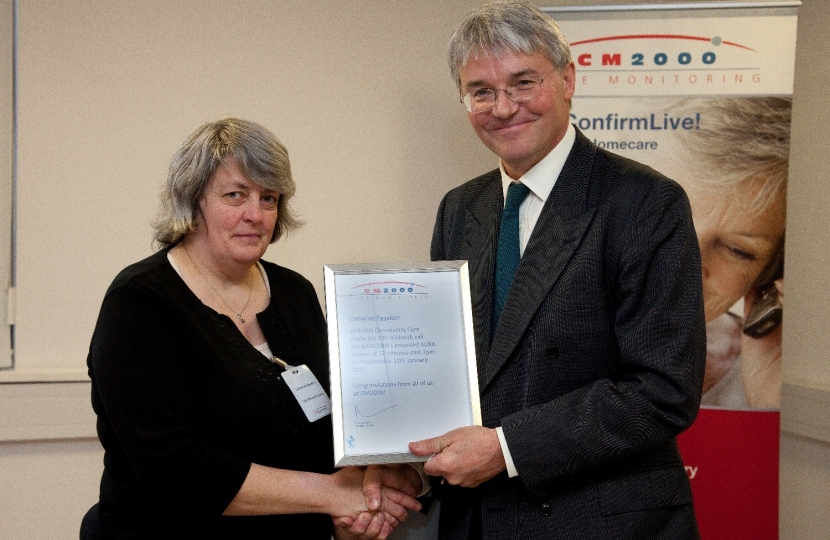 Local MP, the Rt Hon Andrew Mitchell, rushed straight from a meeting with the Prime Minister to be guest of honour at a reception to celebrate two land-mark achievements at Sutton-based CM2000.

The company’s award winning technology, CallConfirmLive!, monitors home care delivery, protecting people receiving care at home and those caring for them. The system now logs over a million calls a week and Mr Mitchell was delighted to present a certificate and gift vouchers to Oxfordshire Care Worker Catherine Eggleton who logged the 150 millionth call.

Mr Mitchell congratulated Catherine on the important work she does with the vulnerable in the community and highlighted the contribution CallConfirmLive! makes to the confidence and security of those wishing to remain at home in old age.

CM2000 were also celebrating being one of the first 1000 companies worldwide to achieve BS25999 – the British Standard for Business Continuity – an accreditation CM2000 believe is critical for companies providing hosted technology in the care sector.

Presenting the award was Neil Hannah, Global Director of Certification for the British Standards Institution who said, “In these days of scandal and mistrust, having independent verification that you have solid plans in place to ensure business continuity is the only way to prove it to your customers.” He congratulated CM2000 for making it through the rigorous accreditation process.

Peter Longman, Managing Director of CM2000 said, “Today’s event celebrates the vital, and often unrecognised, role of Care Workers and also highlights the work that goes on behind the scenes to ensure the systems they rely on are robust and operate to the highest possible standards.”

Andrew Mitchell MP concluded the proceedings by saying, “We are proud to have successful, growing businesses like CM2000 in Sutton.”