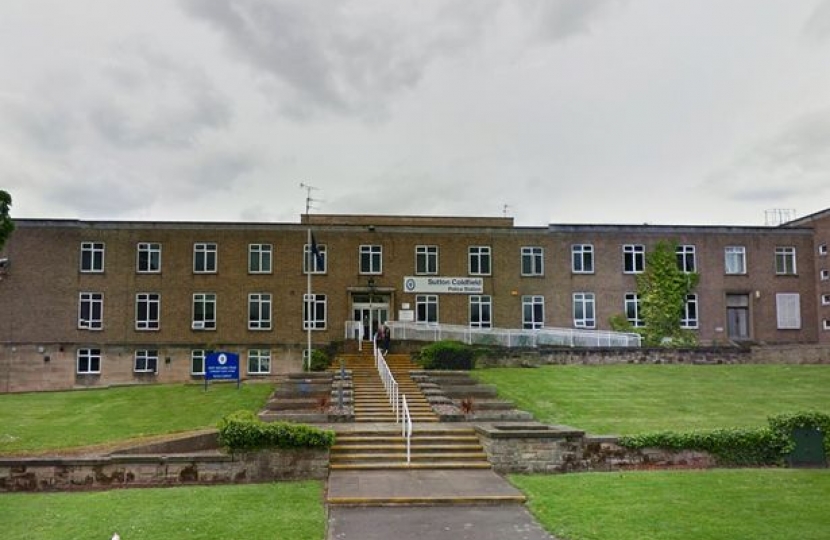 Every year, just before the festive period begins, I visit all of our uniformed services to thank them personally for all of their hard work. Amongst those I particularly thank are our local police. Sutton Coldfield has a busy and important Police Station and on my regular visits, I always enjoy chatting to our hardworking officers.

The station is always buzzing with activity and you cannot fail to be impressed by the hard work and professionalism of our Royal Sutton Coldfield Police officers who work constantly day and night to keep the people of our Town safe and secure. That is just one of the reasons why last Friday, I was astonished at reports that our police station is at risk of being shut down.

The Labour West Midlands Police and Crime Commissioner, David Jamieson, has decided to save money at our expense. Unsurprisingly Labour councillors and apologists have suggested that this is all due to ‘cuts’. This is untrue. While the core Government grant funding is the same as last year (i.e. not a reduction), the Police Commissioner is receiving an extra £9.5 million from local taxpayers. In addition, the police technology and Special Grant is being increased by around £130 million which will support the police in delivering a modern digitally enabled workforce.

The Labour Police and Crime Commissioner (PCC) has claimed that he is facing a funding shortfall of £12 million and needs a minimum of £22 million to ‘stand still’ but his case is riddled with inconsistencies. First of all, the Government is providing flexibility to PCCs in England to increase their Band D precept by up to £12 in 2018/19 without the need to call a local referendum. I note, as above, the PCC has helped himself already. Only this month, the increase was passed through onto local taxpayers which will raise an extra £9.5 million for West Midlands Police.

It is true that the Labour PCC, wrote to me asking me whether I would support a further increase. In my response, I told him that Sutton Coldfield residents were already paying enough and that I did not feel that my constituents would support this, nor did I feel that my constituents would support an even greater increase through a referendum. I urged him to live within his means and to focus on increasing efficiencies. But to be helpful, I agreed to raise some of his points with the Home Office for the future.

Further still, it was only last year that it was reported the West Midlands Police reserves totalled £121.1 million. This reserve level represented 20.2% of overall funding – 1/3 higher than the England & Wales average of 15.1%. This also represents an increase in reserves of £26.9 million since 2011! Yet no reason for holding back yet more money is provided.

As always, I shall be fighting alongside all my constituents to stop this ludicrous proposal from proceeding. I am confident that it will not proceed and we will hold labour to account for threatening such an important facility in our Town. It gives me no pleasure to report that this is just the latest example of labour vandalism towards Sutton Coldfield and I and my Conservative Councillor colleagues will be resisting it in every way we can.