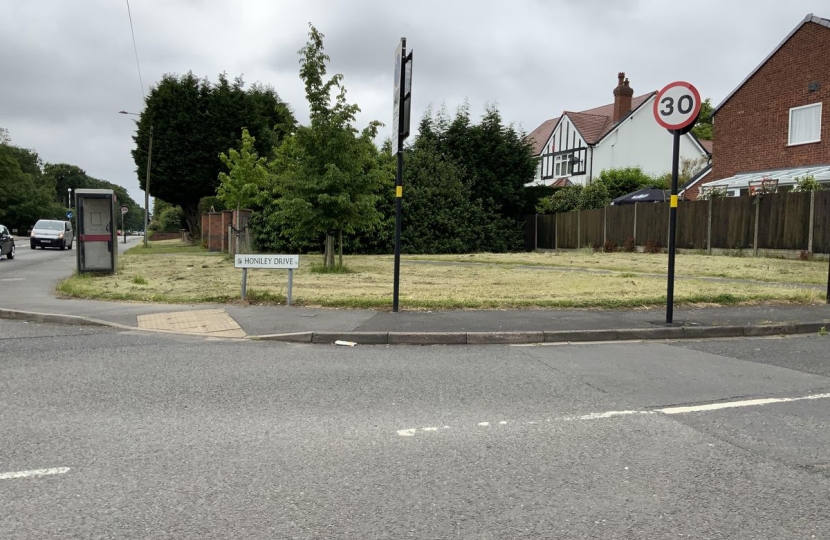 Great news! I write this following tonight’s full Town Council meeting on Wednesday 23rd June. Consequently, I am thrilled to announce that the horrendous plans for a twenty metre (65 foot) telecommunication mast have been rejected by Birmingham City Council. It would have been taller than the trees and houses immediately adjacent to the corner of Honiley Drive and Chester Road North, where this mast was envisaged to stand at the behest of Hutchison 3G UK Ltd.

A great many residents knew about these plans as several of you contacted me to voice your concerns at the scale of the proposal, which would have definitely resulted in the loss of yet more green space. Masts such as these are always accompanied by several unsightly metal cabinets which take up several square metres of ground around these ugly structures. I always say to people, “it’s not the mast alone, it’s the boxes that go with it.”

I was pleased to bring these concerns to the forefront at The Town Council’s planning committee meeting at the beginning of this month, where we were unanimous in raising a formal objection to the City Council in rejecting these plans for the instillation. This shows that our Town Council has a voice and makes a difference, particularly when residents and councillors come together and raise concerns regarding issues such as this.

I can always be contacted by email: alison.jolley@suttoncoldfieldtowncouncil.gov.uk